This article has links to products and services we love, which we may make commission from.

For three weeks in August (04 – 28 August 2023), you have never seen Scotland’s capital so alive. It is the ultimate time of year to visit Edinburgh. Come rain or shine * insert joke about Scotland’s weather here* you are guaranteed to laugh, cry, cringe and gasp and that’s just over your hangover, thanks to Edinburgh City Council’s extended drinking hours! But jokes and rhymes aside, I’m excited to share my years of experience and teach you how to do the Edinburgh Fringe, like a local, in this quick guide.

Show registration for Fringe 2023 will open around 5th May. Tickets go on sale for audiences in early summer.

Planning to stay in Edinburgh? Here’s our guide to Fringe accommodation options.

You may also like our guide – things to do in Edinburgh’s Old Town.

Note to acts and agents: we cannot offer free marketing. If you would like to support a local business (us!) and advertise on this guide, please contact us.

For now, here’s what we enjoyed in previous years.

We’ve also included our 2019 Fringe recommendations at the end of this guide.

What do you want to see?! Comedy, plays, musicals, puppet shows, live radio, cabaret, a single girl telling you how bad her life is through Beyoncé songs?

With over 3000 acts, Edfringe has it all! A good starting point is the Edinburgh Festival Fringe. The official site has an extensive catalogue of events.

Remember to add #EdFringe if you want to share.

You can also download the Edinburgh Fringe app to help you plan your calendar. On the app, you can research events by date and time and purchase tickets.

Most of the Scottish newspapers will provide Edinburgh Festival Fringe reviews and suggest the best shows to see this summer.

Finally, just check out the walls. No space is safe during the Edinburg Fringe! PRs selling shows will greet you (whether you like it or not) on the Royal Mile as you attempt to battle your way through the crowds. The amount of waste during the Fringe really does get me down.

So it’s all on One Cobbled Street, Right?

Wrong! The Fringe is actually pretty spread out and boasts of nearly 300 venues so you need to know your Pleasance from your Udderbelly! 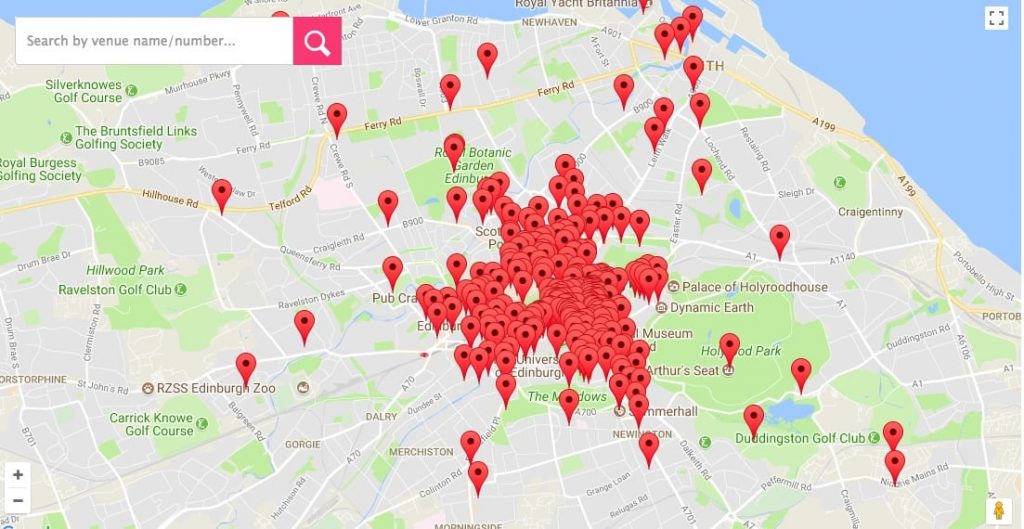 Amongst other venues you will find the Assembly Rooms (54 George St, Assembly has many venues, most around George Square).

This is where I saw Christian Slater in his boxer shorts during One Flew Over the Cuckoo’s Nest.

Al fresco shows and plenty of space for picnics is available at St Andrews Square.

In previous years, the Stand Comedy Club acts have taken over a giant 140 capacity yurt here too.

This is also where Film Fest In The City takes place.

3. The Mound – That Big Hill Near The Castle

Assembly Halls, yes another, don’t mix these up.

This is also home to the popular Instagram spot as it looks quite Harry Potter-ish.

4. The Royal Mile – The Street You See on the Telly

Just under a mile of free shows and acts!

The Royal Mile is a good starting point to help get your Fringe bearings.

5. The Grassmarket and Cowgate – Touristy Pubs

Every nook and cranny of Edinburgh’s Grassmarket is consumed by the Fringe which leads on to Victoria Street, the pretty street said to have inspired Harry Potter’s Diagon Alley.

The Grassmarket is very close to the Cowgate which has lots of pubs which host shows, some are underground!

Check out our guide to the South Bridge Vaults Tour if this interests you.

One of my favourite areas to grab a drink and a bite to eat.

The Spiegeltent is probably the most gorgeous pop-up venue known.

Were you lucky enough to catch Cruel Intentions The Musical here?

The BBC sets up shop for the whole of Fringe offering shows, talks and reviews.

Previous locations include close to the Pleasance and George Heriot’s School, EH3 9EQ.

Udderbelly who brings you the Udderbelly (confusing) is one of the largest companies hosting shows at the Festival Fringe.

Udderbelly venues can be found at George Square, Circus Hub on The Meadows, Udderbelly Bistro Square and the original Cowgate site.

9. The Pleasance – Pretty and Relaxed Area

I’ve seen quite a few small cringe-worthy shows here but also some extremely funny ones.

There are bars at every venue, naturally, it is Scotland after all.

Those on a budget can still enjoy the Fringe. Here are a couple of options for cheap Edinburgh Festival Fringe tickets

Don’t Plan for The Fringe

It is suggested that some people take a bottle of contraband to the Fringe and soak up the atmosphere.

Some of the best shows I’ve seen, such as Baby Wants Candy, were watched on a whim.

Plonk yourself down and celeb spot! A

couple of years ago I was stoked to meet the Scottish comedian Danny Bhoy but that was knocked off the top spot after spotting The Big Yin himself, Billy Connelly, sauntering past with his hair bouncing behind him.

Check out this 90-second video on Edinburgh Festivals.

→ What do you recommend?

Did you know that the Fringe is not the only Edinburgh festival in August?

Edinburgh Fringe Festival accommodation is expensive and in high demand.

We’ve created a guide on the best places to stay in Edinburgh so read that before booking.

2. Can I avoid staying in Edinburgh?

Yes, and many locals actually do the same!

Check out the commuter towns of Dunfermline and Inverkeithing in Fife, the seaside town of North Berwick and even Leith just outside of the city centre.

3. How busy does the Fringe get?

The Old Town is jumping during the Fringe. Some love it, others hate it.

Any shows you really want to see are best booked in advance.

Expect to wait in line for free shows, especially at the weekend.

This will help immensely with your planning too so well worth a download.

5. Where is the Edinburgh Fringe Box Office?

The official box office is at 180 High Street.

However, different venues have their own box offices too. These are found at the venue location.

There are also a variety of pop-up box offices too around the city.

So to conclude this guide on the Edinburgh Festival Fringe – plan or don’t plan but take a brolly!

One of the highlights of the three weeks, for me, is the Edinburgh Festival Fringe comedy shows.

“I keep randomly shouting out ‘broccoli’ and ‘cauliflower’ – I think I might have florets.” – Olaf Falafel

If you really enjoyed your time at the Fringe, why not return for our Edinburgh International Book Festival.

I had the privilege of listening to Malala Yousafzai speak about her new book at this book festival.

Oh and don’t forget to check out the best bars in the Old Town.

What tips do you have to make The Fringe the best year yet?

Plan your trip, tips & advice
Where to stay in Edinburgh
Food & drink in Edinburgh
Best time to visit Edinburgh
Things to do in Edinburgh
How much does a Edinburgh cost?
Free 7-day Scotland itinerary

Plan Your Trip To Edinburgh

Book accommodation at Booking.com
Reserve a skip the line pass or guided tour at GetYourGuide
Save money with this Edinburgh Pass

Everything Edinburgh is a friendly Edinburgh guide for visitors and locals. From food to festivals, itineraries to interests.